Toughman Half Ironman race report: And the winner is..... 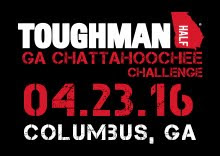 It was less than two weeks ago when Karel decided to race in the Toughman Chattahoochee Challenge. We knew our friends Lauren and Nick would be racing so Karel registered as a last minute decision and I made the travel arrangements for our quick trip to Callaway Gardens for the race.

This was a no expectation race for Karel with the opportunity to race under pressure. There's nothing that compares the mind and body for a race than by participating in a race so that is why he wanted the pressure of being in the race environment and feeling the "pain" that goes along with racing.  And with Karel's key races approaching (Mountains to Main Street Half, Ironman Austria, Ironman Mont Tremblant) this was also a great change to practice transitions and to go through all the motions and emotions of racing.

We made the trip to the Pine Mountain area late morning (3.5 hour drive south) on Friday to check into our hotel by the afternoon.  After we unpacked, we headed to the Callaway Garden beach at 4pm for Karel to pick up his packet. We chatted with our friends Lauren and Nick and then Karel picked up dinner at the Country Store Restaurant (chicken sandwich). We headed back to the hotel around 5pm and while Karel was eating, I walked the 1/2 mile to "downtown" to explore the shops and to pick up my dinner at 153 Main Bistro (arugula and beet salad). I brought some food items from home for our mini fridge along with the necessary race day morning items: french press, espresso beans and the electric kettle.

While Karel relaxed, ate his sandwich (and some mashed potatoes that we brought from home, homemade from the night prior) and played around with his new Lazer Wasp helmet, I did some work on the computer with Campy enjoying his overnight adventure.

Around 9:30pm, Karel was ready for bed and I watched Netflix until 10pm and then it was officially time to sleep. My training has been very intense over the past two weeks so I was eager to get a good night of sleep and super pumped to watch Karel and to not have to train on a Saturday!

The alarm woke us up at 4:30am for Karel to give himself 80 minutes before we headed to the race venue. Karel doesn't have a typical go-to pre race meal but instead, a combination of foods that he chooses from on race day morning. For this race he had oatmeal with a Bolthouse Yogurt drink and a croissant. Along with his typical coffee. Karel pre-made his bottles the night prior with around 280 calories in each bottle (3 bottles) and kept them cool in the mini fridge, along with his 4 flasks for his hydration belt (each with around 80 calories per flask). He had a gel and "gummy bears" (aka Clif Margarita bloks) for the bike in his "bento box" on his bike.

Around 6am we headed to the race venue (1 mile away) and parked. Although a smaller race, the excitement was still in the air with the other athletes around us on a cool spring morning. Although it was mid 50's for the race start, the predicted temps were in the mid 70's. Perfect racing!

Karel set-up his transition and proceeded with his morning warm-up (jog and dynamic stretching) and then around 7am, made our way to the water so he could do a short swim-warm-up in the 66-degree water.

After the normal pre-race to-do's, it was time for the male athletes to start around 7:30am.

The swim was a two loop swim. Karel and I are in the water a lot and although we don't swim together a lot (I like to swim in the AM, Karel prefers PM), I knew he would have a good swim as his swimming has improved a lot in the past few months. He has improved his body position in the water so I knew he would be more comfortable than ever in the open water. Sure enough, he swam great and was around 6th athlete out of the water in his first ever sub 30- minute swim. Yikes - I better step up my swim game!

After Karel exited the water, I ran to transition (with Campy) to give him a good luck, have fun, yay the swim is done now you can ride your bike cheer and off he went.

Karel passed several guys in the early stages of the 56 mile bike and enjoyed the rolling hill bike course. The course was a two loop course.

While Karel was on the bike, Campy and I went to the hotel to pack-up and check out and we had plenty of time to spare before Karel returned from the bike. We walked around the beautiful lake and then waited and waited for Karel to come in off the bike. I anticipated Karel to be near the front after the bike so when the motorcycle came with the lead biker, I thought it could be Karel but I was wrong.

1 minute, two minutes, three minutes...nearly 4 minutes later Karel was in transition.
Karel later told me that the first place guy off the bike (and 2nd overall) use to race bikes so Karel was familiar with him from his cat 1 bike racing days.

Karel quickly dismounted his bike, removed all his bike gear and prepared for the 13.1 mile, two loop (with 1 out and back on each loop) hilly run.
Karel put on his hydration belt and off he went....on a mission.

Karel did not use any power for the bike but instead, went entirely by feel. Karel has always preferred racing this way and would rather review his file after the race to learn from his RPE execution than let a gadget run his race. Karel feels he can perform the best when he can listen to his body and not have pressure from a gadget to hit certain watts or speeds. He has a high threshold for pain but he also understands that in a long distance triathlon, it's not about being fast in one sport but being the one who slows down the least.

It's been a long journey of healing since Karel tore his plantar fascia last June and Karel was finally looking forward to the opportunity to test out his foot after Kona in a long distance race and to enjoy the hurt that comes from racing - not from his foot being in pain but instead, from his muscles and heart working so hard. It was so great to see Karel out there doing what he loves - racing the competition.

Karel looked really good when he exited transition area. We always tell our athletes form over pace and Karel did just that. He took the first few miles to establish great form and he never let his gadget run the race. Once gain, he did the entire run by feel - with one goal of chasing down the competition.

The run was very spectator friendly and Campy loved cheering for his daddy. We even got a little smile out of Karel when we saw him around mile 1. That was the last time we saw Karel smile until he crossed the finish line.

Karel had already made up a good chunk of time when the leader passed mile 1 and by mile 6 (just after the out and back section on the first loop) Karel was around 80 seconds away from the leader. Karel continued to look good and he stayed hydrated with his flasks along with an occasional sip of water from the aid stations.
Although it was getting warm out, Karel later told me that he never felt hot and he felt strong for the entire run. He said it was perfect conditions and he loved the challenging bike and run race course.

The run included several rolling hills but the two loops made it great to know what's coming for the 2nd loop. The course was well marked but the volunteers did a great job helping out the athletes to stay on the run course.

When I saw Karel for the 2nd time around mile 7, he came right after the lead biker...which meant he made the pass and had taken the lead. This was the first time Karel was ever in the lead for a half Ironman so I was so happy for him to have this moment. Although I wasn't sure what would happen in the next 6 miles, I knew Karel wouldn't let a tired body (from racing) keep him from pushing. He just loves the pain of racing (and that probably comes from years of crit racing). I wish I could dig half as deep as Karel..... I was getting a lot of endorphins just watching him!

After I saw Karel around mile 8 before he did the out and back on the 2nd loop, Campy and I walked back around the lake to the finish.

Although I was hopeful that Karel would hold on to his lead, I know in racing you never know what will happen until the finish line is crossed.

Karel was super happy with his day. It was a great day for Karel to race with no expectations and to just let the body do what it trained to do. The gadgets did not run the race, Karel simply raced his nearest competition and executed really well on this day.

After Karel crossed the finish line, he did a short little interview for the Toughman crew and then he cooled off with something to drink. He wasn't ready for any food but around 40 minutes later, he was ready to get something solid in his belly (a small slice of pizza and orange slices)
The venue had showers so as Karel cleaned up, Campy and I cooled off in the car in the AC.
Karel did a short spin on the run course for 20 minutes to shake out his legs after the race on his bike and to cheer on the other athletes who were still racing. Karel also told me that he gave some cheers to the other athletes even as he was racing. There's something so powerful about cheering for other athletes and thanking the volunteers even when you are suffering.

Around 3pm we attended the awards ceremony for Karel to receive his first ever overall half ironman award.
Our friends Lauren and Nick also did great - Lauren was 3rd overall female and Nick placed in his age group.

It was fun to hear their war stories from the race and to celebrate the accomplishments by all.

I am so proud of Karel - he stays focused with training but also has a great attitude when it comes to racing. Despite being competitive, he never lets competition and personal goals/expectations take the fun away from personal development and simply doing the best he can when he trains and races. Karel never races with his ego but instead, loves the challenge of racing. He knows that hard work works and he is willing to put in the work and make the necessary investments (within reason - Karel will never give up carbs, croissants, chocolate, bread or pastries) to improve his performance.

Here's a video that I put together from the race.
Clearly, Campy shared the spotlight with Karel.

Next up - Rev3 Knoxville for me and Mountains to Main Street for Karel on May 22nd. 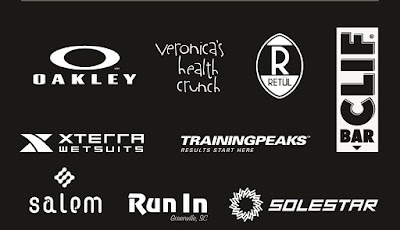 Thank you to our 2016 Trimarni sponsors for your support!