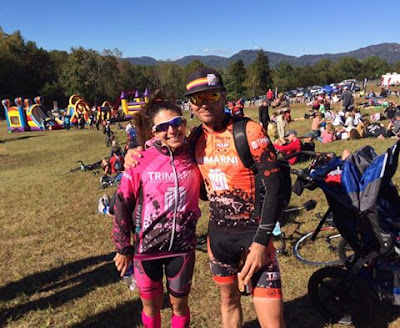 There was a time when I was afraid to be on two wheels in a group ride. My skills were sketchy, I didn't feel one with my bike, I wasn't able to anticipate the dynamics of riding with other people, my cycling fitness didn't allow me to push when the group ride effort increased, my bike handling skills were horrible, my reaction time on my bike was non-existent and above all, I was afraid to ride around more experienced cyclists.
I didn't grow up riding a bike so being on two wheels always felt foreign to me.
Lucky me - I happened to marry a very experienced cyclist.

Like with any fear in life, if you avoid what makes you feel uncomfortable, you'll never get better.

When we moved to Greenville, SC. in May 2014, I traded the beach for the mountains and I was forced to become a better cyclist. Since learning how to ride a tri bike back in 2006 for my first season of endurance triathlons (a half and a full IM), it wasn't until we moved to Greenville, 8 years later, that I really found myself learning how to ride a bike.

It's crazy to think how uncomfortable I was riding a bike for the first 8 years of triathlon racing yet I continued to want to get better as a triathlete. Karel always told me that my skills needed a lot of improvement if I wanted to get faster on the bike.
As a coach, a big part of me is upset that I didn't make more of an effort to work on my cycling skills earlier in my tri career (like really devote myself to improving my skills instead of just every now and then trying something once) because I realize now that not only was I limiting my performance potential by lacking with proper cycling skills but it was also unsafe for me to be out on the triathlon race courses as a very inexperienced cyclist on a tri bike.

Thankfully, I am married to a cat 1 cyclist who just happens to know a thing or two (or everything) about bike riding. When Karel gets on his bike, it's as if he is walking - it comes so natural, like one foot in front of the other.

I have watched Karel race bikes and I have studied his skills. I pay close attention to him when he rides to learn from his expertise. Despite our battles on two wheels (like when Karel wants me to stay on his wheel or try a new skill and I feel anxious about trying something new but I know it's for my own good and I still argue with him anyways), my progression as a "cyclist" was a long time coming.

While I still feel like I have many improvements to make on two wheels, I have finally embraced the fact that if I want to be a strong, fast and skillful cyclist, but also a cyclist who is safe on the road that is shared with cars and other athletes, I can never ever stop working on my cycling skills and I have to continue to put myself into scary situations on the bike to make myself more comfortable.
If you constantly ignore your fears, you can't improve.

After 2.5 years of living in Greenville, I can confidently say that not only has my endurance, resilience, strength and speed improved greatly in our new riding terrain (where we either go up or down - there's little "flat" where we ride) but my skills are better than ever before.
It's interesting because even when we have a Trimarni camp here (group or private), our campers improve their skills dramatically in just the 2-4 days that they are with us. I'm not kidding when I say that Greenville riding forces you to become a better cyclist.
I can corner, take sharp turns, descend, anticipate climbs, change my gears, react and climb better than ever before. There is still work to be done but after participating in the Hincapie Gran Fondo 80-mile event on Saturday, I couldn't be more proud of myself as my "performance" on two wheels was nearly 10 years in the making. 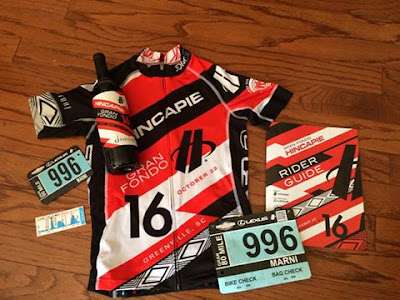 This was our first time participating in the Hincapie Gran Fondo and now that the event has passed, we can both agree that we WILL be back again next year. Of course, it is nice that we only live about 20 minutes away from the event start BUT the event was well worth the registration fee.

We received a jersey, bottle of wine, bib numbers (with chip for timing), great post event food (for athletes and family/friends at Hotel Domestique) and best of all, a fully supported course for 80-miles with great signage, cops everywhere controlling any cars on the road, stocked SAG stops (which I didn't utilize except to refill my bottles), wheel and tech support and over 1500+ participants.
Although the Gran Fondo was an event, there was a start and a finish and timing so technically, it was a "race" for some but an event to conquer for most. 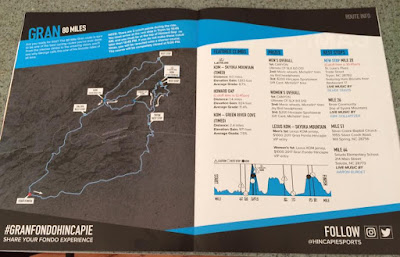 Karel and I have been on every part of this course but never combined all together. Here is the Map My Ride Gran course if you are in the area and would like to do the ride. The great thing about where we live is that we have many accessible riding roads (like endless routes) which are very bike friendly. You can safely do this ride anytime of the year.
We try to incorporate most of this ride into our training camps just because it is filled with challenging climbs but also absolutely beautiful scenery.
The course included 3 significant climbs (Skyuka, Howard's Gap and Green River Cove) but in between every climb is.....more climbing. Almost 8100 feet - which is very typical as most of our rides come out to about 1000 feet of climbing per hour of riding. 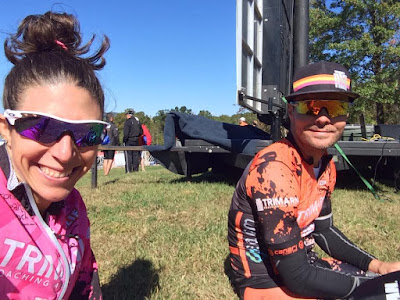 I can't say enough great things about this event and it was so nice to give myself a morning to be on two wheels, with other like-minded individuals, just enjoying nature....with a bit of suffering. Nothing makes me feel more alive than when I am on my bike, in the mountains.

Although it was cold to start and there was a lot of suffering as I found myself riding with some exceptional cyclists for over 50 miles (more details soon in my event/race recap), inside, I was so incredibly happy to be on my bike for 80-miles on Saturday morning.

I love every part of this event course (except Howard's Gap - the hardest climb we have here and you don't know how hard it is until you do it) and I almost didn't want the event to end. The 80-miles went by so quickly and I was just so happy for the almost 5-hours that it took me to cover the 80-miles on this course.

Here are the RESULTS.
It's hard to believe it but even without a swim and a run, I feel like my event/race recap is going to be tough to gather the right words to describe this incredible experience on two wheels.

Karel also participated in the event and he had so much fun as the entire experience took him back to his bike racing days. He raced with the guys at the front of the race (including a few pros, like George Hincapie making it all look so easy) and really pushed up Skyuka. At that point, Karel's legs reminded him that he just raced at the IM World Championship a few weeks prior so he had to back off the effort and just survive to get back to the finish. But nonetheless, he had a great time on his bike as he is always happy on two wheels.