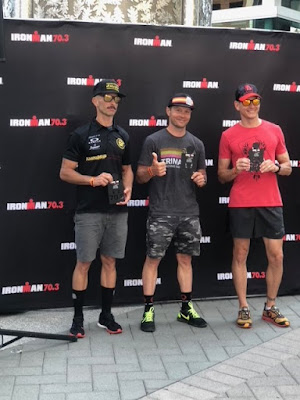 After St. George 70.3, Karel felt like his fitness was finally coming along. Karel loves racing much more than training so he hasn't been too thrilled with the fact that his next race isn't until July 1st (Ironman Austria). With the half distance being a great distance for him (he can recover quickly and race them more often), Karel decided to register for Raleigh just a few weeks ago as an opportunity to try something new..... to treat a race as training. Unlike a lower priority race that still deserves some type of "taper", Karel went into Raleigh as if it was a long Swimbikerun brick. In other words, his training didn't change much on race week. Karel put in about 14 hours of training before the half IM on Sunday but surprisingly, felt really good going into the race. By his own admission, he never feels like taper works well for him. While he knows rest and recovery is beneficial, Karel wanted to see if he could spice things up on race week by incorporating more intense and longer sessions alongside active recovery and still deliver a good performance on race day. Regardless of the outcome of the race, Karel was looking forward to trying something new and to be honest, he felt much fresher going into Raleigh than in past races and his body seemed to respond well to the load.

Karel traveled up to Raleigh with our athlete Thomas on Friday morning and after checking in for the race, they headed to a very warm lake for a swim followed by an easy spin on the course. Afterward, Karel checked into his hotel (Red Roof Inn in downtown Raleigh) and Thomas went to his friends house for the rest of the weekend. It was strange to be at home and to not be with Karel but I had a very important project to get done at home so sadly, I was unable to see Karel race (which I think this is the first time I haven't seen Karel race a triathlon).  Karel didn't mind being alone since it was a rather quick trip and not an important race for him. Before Karel left, I prepped food for him so that he didn't have to go to the grocery or order-out. He was thankful to have a cooler packed with lots of snacks and a few pre-race meals (chicken and rice for the night before the race and potatoes, eggs and spinach for his lunch meal on the day before the race). Of course, Karel managed to find a bakery to fulfill his croissant and bread-needs. No surprise that the only money he spent on food was on bread items...oh and post-race ice cream.

I talked with Karel on Saturday and he wasn't at all nervous. He said he felt really good and was excited to race. The only thing that he was not looking forward to was a super early 3:30am wake-up  call on Sunday morning. Long gone are his cycling days when his races didn't start until 6 or 8pm in the evening. He had no expectations for this race except to see how this no-taper strategy would work out for him and to just go through the motions of racing while treating it like training.

Swim: 32:31
Karel's wave started at 7:40am so he had some time after the shuttle arrived to the swim start (Point to point race) to put his hydration on his bike, pump up his tires and get in his morning warm-up. He had to turn in his morning clothes bag around 6am so he had to do his morning jog barefoot. Karel said that he was able to eat a bit more than normal due to the later start time which in hindsight, he felt helped him with digestion and having a little more energy in the tank. Typically, Karel eats his pre-race meal super early (around 3:30/4pm and just snacks in the evening) but doesn't like to eat a lot on race day morning. This time he was able to eat much more than normal. Thankfully, Karel was able to get into the water to warm-up before his wave started. Karel hasn't felt the swim "panic" that he use to feel in the first few years of triathlon racing but getting in the water before the race really helps him out.  Karel new that the swim times were historically slow at Raleigh (possibly due to the warm water) so he gave himself a realistic swim goal of 33 minutes (non-wetsuit swim). Karel enjoyed the freedom of not having to swim with a wetsuit and felt really comfortable in the water. There were times when the swim course got a little crowded but overall, it was a really good swim for him and he was pleased with his swim time.

Bike: 2:24.04
As I have mentioned in previous blogs (race reports), Karel has been a little frustrated with his bike fitness this season. While his back is no longer hurting him when he rides thanks to his new Ventum, his legs don't seem to want to show up on race day. He has admitted that he needs more intensity on the bike with less climbing and more steady state harder efforts, and less endurance work - so that's something he will incorporate into his future training. But he felt like he rode well and was happy with his bike effort on this day. He didn't feel that drafting was an issue and he managed the terrain, which he felt was a fairly flat bike course that favored the athletes who can hold high power for steady efforts. Probably not the ideal course for Karel but a great opportunity to be in a race environment. Karel enjoys more technical and challenging courses as that suits his strengths on two wheels. Karel felt his energy was good on the bike. He consumed around 550-600 calories total for the bike. He decided to use a bottle of OSMO for more electrolytes and then 2 bottles worth of INFINIT (our Trimarni custom formula) in his hydration system. He liked having the two different hydration options and said everything digested really well. He also had two Clif bloks just to entertain his taste buds. Karel does a remarkable job of not letting his times get into his head on race day. While he enjoys reflecting on the race afterward, he recognizes the importance of staying in the moment and not wasting energy on "what should have been" but focusing on "what is". Karel goes entirely by feel when he races, never chasing any numbers. While he will occasionally check-in with his data on his bike computer, he doesn't over-analyze. Same for the run - he never chases any times or paces but just focuses on his form and finding a rhythm that he tries to hold throughout the entire run. It's always a surprise for him to see what he runs when the race is over as he typically has no idea of his splits or final time until he crosses the finish line.

T2: 2:43
After putting on Nike Vapor Fly 4%, Naked Running Belt (with two flasks, one with Precision Hydration 1000 and the other with 1500 and then a small Hot Shot flask filled with Enervitine), trucker hat and sunglasses, Karel was ready to run.

Run: 1:22.47
And oh did he run.....FAST! Karel said from the first step on the run course he knew it was going to be a good run for him. He was passing athletes left and right and because of the course layout, he felt like he could have ran just a tad faster if there was more room on the course. He didn't complain about the course set-up as he is there to race the course that he is given but it did get a little tight at times. As I was tracking him, I could see him moving up in his age group rather quickly in the run and eventually, I knew that no one was going to catch Karel. Although anything can happen in long distance racing, Karel has really never had a bad endurance triathlon race - no bonking or GI issues so I am fairly confident when he gets to the run that he can put together a strong performance. This time around, he was flying! Not too long ago, he questioned if he would be able to keep running fast as he gets older, but nearly 42, he keeps surprising himself with these amazing race day performances. The reason why I say amazing is because unless it's a random "speed" workout, he never runs consistently this fast in training. He just knows how to put his "best effort" together on race day. He enjoyed the cheers from familiar faces and somehow, put together his best ever run on a very hot day. Karel said he felt good throughout the entire run until the last 4 miles which got really hard. He had to use all his mental strength to get through those miles, especially the last mile that seemed to drag on forever until the finish line.

This was Karel's first-ever age group win and highest overall placement in an Ironman-branded half Ironman. He was so happy with his performance and it was just what he needed to boost motivation and excitement for the next block of training. Although his big focus of the year is the 2018 Ironman World Championship in October, he is looking forward to the next few races on his schedule as opportunities to test his fitness, try new things and take some risks. Karel loves being in a race environment as it always seems to bring the best out of him.
2018 Trimarni Supporters and Affiliates

We would like to send a BIG thank you to our Trimarni sponsors and affiliates for supporting the Trimarni team: