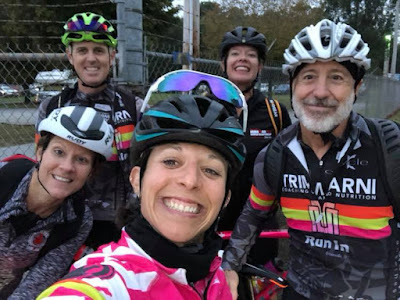 Shortly after moving to Greenville in May 2014, Karel and I went out for a ride to check out our new cycling routes. I came home with tears in my eyes "Karel, it's too hilly here. There's no way I'll ever be able to ride here!"

Little did I realize that Greenville was exactly what I needed during such a tough time in my life....I had just lost my dad to Cancer.

After a year of embracing the challenging terrain, I found myself getting stronger. My cycling skills improved and I was riding better than ever before. Most of all, my love of cycling grew incredibly strong and I found myself itching to be outside on my bike for it was the closest way that I could get to nature and enjoy all that Greenville had to offer us.....farm animals, mountains and lots and lots of climbing. Greenville provided us with bike-friendly roads and the bike became a safe, fun and healthy outlet for me to clear my thoughts, work through my emotions of losing my dad and to step (far) outside of my comfort zone. 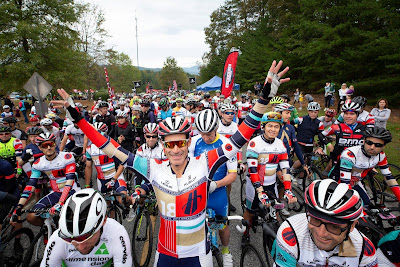 Source: Facebook
George Hincapie has created something special with the Hincapie Gran Fondo. With your registration fee, you get a jersey (for the medio and gran distance), bottle of wine and an incredibly awesome event experience including chip timing, full-stocked SAG stops, bike support, well-marked roads (and climbs), great volunteer support and an amazing feast of food at Hotel Domestique (the start/finish of the event).

While the Gran distance (80 miles, 8100 feet of elevation gain) includes three of our toughest mountain climbs around our area, it's sure to make you feel accomplished when you get to the finish line. There are also two other distances (15 and 50) that are worth trying out as you still get lots of mountain views and a chase to surround yourself with many like-minded individuals.


As for the event itself, I lined up with my athletes (Reid, Meredith, Bryan and Diane.....Dana was a bit behind us) around 7:30am. We took turns going to the bathroom and dropping off our bags at bag check. The start of a cycling event is always a bit crazy so come 9am (after the professional rider shout-outs of Mark Cavendish, Sir Bradley Wiggins and Christian Vande Velde), it was nice to finally get rolling. The temperature was cool but not cold as it was in the upper 50's with a slight midst in the air. I wore an undershirt under my jersey and arm warmers, along with my cycling shorts.

With this being my 3rd consecutive time participating in this event, I knew that the first 10 miles would be really chaotic and my goal was to stay safe. Karel was not participating in the event this year but told me to give it my best effort to leave it all out there.

The first 10 miles were neutral, which meant that the riders on the front who were "racing" could not pass the lead vehicle. There's a lot of vehicle support on this course and it's very well-marked with volunteers all over the course. Although this event brings a lot of "racers" anyone can participate. Only those who choose to "race it" do so but everyone feels the same type of accomplishment at the finish.

After veering off Hwy 11, it wasn't too long later when I heard the sound that you never want to hear when riding in a group. It was a huge crash with the group that I was riding with (the main front group). Luckily, I was able to dodge the crash that occurred right in front of me as I was on the far left of the road (riders can take up both lanes on most of the roads. Although the course is not closed to traffic, only one car passed me over 80-miles). I managed to keep my eyes straight in front of me, instead of looking over at the crash, which allowed me to find room to move my bike to the grass. I am thankful to Karel who has helped me improve my cycling skills over many many years. I eventually jumped back on the pavement and never had to dismount my bike. I didn't look back as I knew that help would be on its way and with so many people tied up in the crash, there was nothing I could do to help. Hopefully everyone was ok. 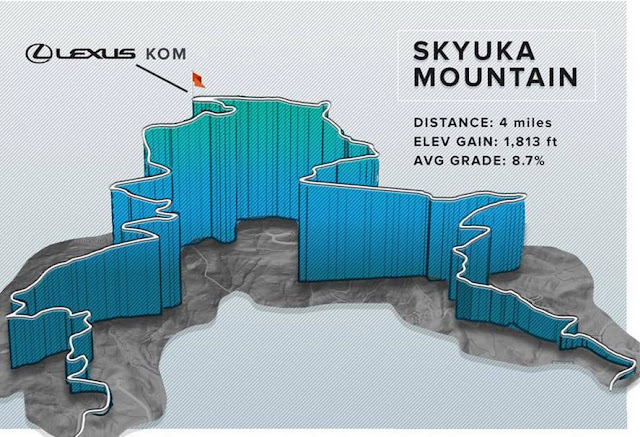 Although nothing is flat or easy with the 80-mile route, there are three major climbs. The first is Skyuka mountain which occurs around 24 miles into the 80-mile ride. At this point, I had only been riding about an hour and we had already covered ~1500 elevation gain. Group riding is very tough for me for it's a lot of accelerating and riding someone else's effort (everything that triathlon is not) but I enjoyed the challenge. I was also "racing it" from the gun with no real agenda on strategy but just giving my best and being strategic throughout the event to try to get to the finish as quick as I could.

Once I started climbing Skyuka, I warmed up really quickly even though the air temp was dropping to the low 50's and it started to drizzle. The Skyuka climb took me 30 minutes and 22 seconds and I placed 5th out of 65 females on that climb (one of two timed climbs). It was a relief to get to the top, enjoy the view, top off my two water bottles and start the descend. While my heart was pumping hard throughout the climb, it only settled a little bit during the technical four-mile descend on wet roads. 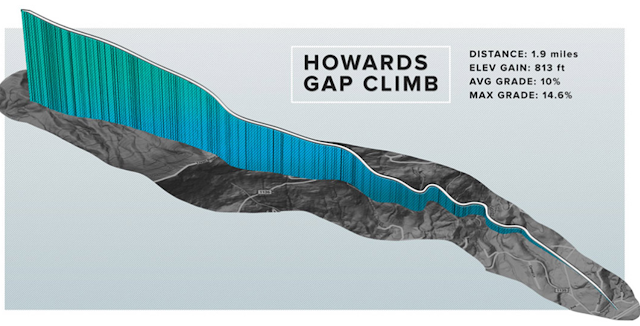 Less than four miles later, it's nearing time for the 2nd major climb of the Gran Fondo. And this climb is the nasty one. Howards Gap is probably the most difficult climb we have around where we live (well I think the 30% grade climb that Karel took me on once ties with this one) as it is two miles of straight road, averaging around 10%. I covered Howards Gap in 16 minutes and 43 seconds, my average speed was 6.9mph, cadence averaged 61 rpm, and it was a relief to get that climb behind me.

While the "main group" (with George and several other notable riders who were not technically racing but still racing from SAG stop to SAG stop) passed me up Skyuka, I went ahead at the top so I could get as far ahead as I could before getting caught again. At this point in the ride, I was feeling strong but certainly my legs were getting a bit tired. I managed to stay with small groups after Skyuka which was good for me to keep pushing a strong effort to keep up with the wheels in front of me.

The Green River Cove loop is one of my favorite routes. It's a little over 20 miles and has beautiful scenery that reminds me of the Lake Placid region. There's a lot of descending and climbing within the loop but you do get several miles of flat to settle into a rhythm. The feature of this route is the Green River Cove Switchback section that comes at the end of the loop and includes 17 (more like 20+ if you counted every single switchback) over 2.4 miles. While the switch backs break up the momentum, the sections between can be rather steep. It's a relief when that climb is complete as you know you are only about 15 miles away from the finish.

In one of the very steep downhill switchbacks around 5.8 miles into the loop, I was caught by the main group and had a large group of guys around me (who had much better cycling skills than me). This switchback is incredibly steep as you are going downhill and it's a tight 90-degree right hand turn, followed by another sharp left turn. The road was wet and I was trying to ride as safe as I could. Perhaps I was squeezing on my brakes too hard but soon after those two switchbacks, my front tire exploded. It was a super loud pop and it was immediate to me that I had a flat.

My first reaction was sadness because I was having such a strong ride near the front of the race. I was then passed by lots and lots and lots of cyclists, as well as a few girls that I had managed to pass on Skuyka and Howard's Gap. But then I told myself that the longer I wait on the side of the road, the less chance I have to catch back up with the group at the upcoming SAG stop at the church. I changed the tire in less than 4 minutes and jumped back on my bike and thankfully, the group was still at the SAG stop. Just to be safe that I had enough pressure in my tire, I went over to the Boyd Cycling truck and asked for a pump. He pumped it up to 90-95 psi, put the wheel back on my bike and then BOOM. It flatted again. At this point, the tread was ruined and perhaps it was my fault that I pinched it when I was trying to change it or just bad luck but I was in need of a tire or wheel change. I noticed that the group was getting ready to leave so I asked for a wheel change. I received a new wheel, the mechanic adjusted my brake so the wheel would fit and then I thanked him greatly for saving my ride. Thankfully Boyd Cycling is in the area so I can exchange back this demo wheel for my wheel this week.

I managed to hang with a strong group of 4 guys to the start of the Green River climb when we got caught by the main group (more like swallowed). I tried to hang with the climbers but I only lasted about two switchbacks. It was fun suffering while it lasted. Mid-way of the climb, a girl (Austin) caught me and I remembered her from Skyuka (I passed her right at the top). She was riding super strong and we ended up finishing the last 15 miles in a group together. I could not match her strength on two wheels so she got me at the finish line but I was proud to give all I could all the way to the finish line. I completed the Green River Cove climb (timed) in 15:20 and placed 4th out of 46 females.

Despite an eventful event, I had a blast. I suffered, I finished exhausted, I took risks, I had fun and I felt grateful for all that my body allows me to do. Oh and the post event hot shower truck was amazing!

While life has been busy lately, it was nice to be able to escape the daily life stressors and enjoy a few hours on two wheels, on our amazing cycling playground, with 2500+ other people who love riding bikes. 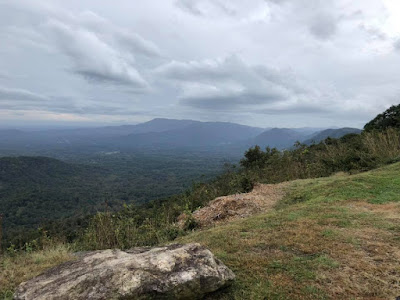