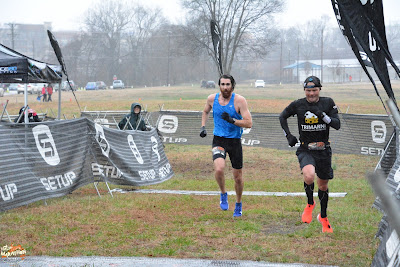 In the thick of triathlon training, Karel had his second (and last planned) running race of 2019. The first was a 5K in January. This past Saturday, Karel participated in the Prisma Half Marathon.
Karel loves to race and he actually receives a performance boost from his races. Despite no specific training for these road races (ex. intervals/speed work), Karel has been able to outperform his expectations and bounce back quickly into his structured triathlon training. I am the opposite - running races take a lot out of me, physically. Although I've been injury free since 2013, my body is resilient but I have to be very careful and strategic with my run training (volume, frequency and intensity). I actually feel that I am a more efficient runner off the bike than in a stand alone running race. If I'm going to do a road race, I'll select a fun one to do in the end of the season (after my triathlon season is complete, like I did this past year in October) as I know I've accumulated a lot of fitness and durability at that point.

The alarm got us up at 5am after a good night of sleep. It's always nice to sleep in your own bed before a race. Karel kept to himself doing what he needed to do to get himself race ready (espresso, oatmeal, more espresso, a short jog, bathroom, mobility work, etc.) By 6:30am, he was out the door and drove himself a few miles down the road for the start of this point-to-point race. With an hour easy run on my training plan, I jumped on the treadmill at home around 6am so that I could get my run done early in order to watch Karel finish near downtown Greenville. With my bag of food packed the night prior (and recovery drink/food for Karel), it was a quick transition from my sweaty indoor run to shower to car. By 7:45am, I was in the car in route to the grassy field outside Carolina Triathlon, near downtown Greenville (~8 miles away). With the 5K finishing around the time I arrived, it was easy to find parking near the finish.

The weather was cold and dreary and it was only a matter of time until the rain was coming. I tried to stay warm inside my swimming parka but wet shoes from the muddy grass had me shivering. 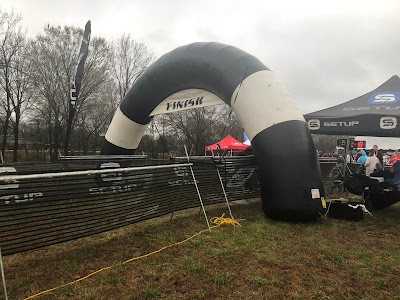 Around sixty-five minutes into the half marathon race, the leaders were coming. It was a sprint for the finish! With no idea of how fast Karel would run (his previous PR was 1:21 in 2013), I knew that Karel's secret goal was to break 1:20. As the minutes passed by and several more young male finishers crossed the finish line, it started to rain and in the distance, I spotted Karel. He was pacing off another guy and I could tell he was fighting hard to stay with him. Nearing the finish line, Karel managed to sneak right passed him.

Not knowing Karel's exact time, I couldn't wait to ask him. Karel was having a bit of a coughing attack from the effort so as soon as he calmed down, I asked him his time and I couldn't believe it - 1:15!!! His official time was 1:15.24!! 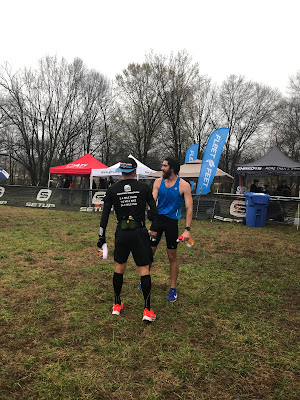 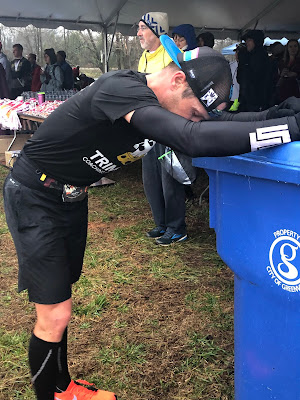 Wow! I really didn't think I can go this fast. My secret goal was to break 1:20 which would be my best time. Going almost 5 min faster is just nuts :-) So, when I read the race pacing suggestion from my coach of starting at 5:45 min/mile and then settle into 6 min/mile and that it would feel easy I was like, what? I don't think I can do that! Sure enough, starting at sub 5:40 and then staying in sub 5:50's mile after mile was crazy - I couldn't believe it was happening. I ran behind another runner who I thought was running stronger and I was just drafting behind him. It was just 2 of us. All I did was stay behind him and try to hang on. He did a few surges to get rid of me but that didn't work. I felt really good and felt like I'm cruising fairly comfortable behind him. Not that I could go any faster but it wasn't a blow-up pace. Then sometime in the 2nd half of the race, this guy started to slow down a bit. I thought he was just playing games with me but then I realized he is really slowing down. Luckily for me, another guy just bridged to us and after a brief break, this other guy took off. I went with him and we lost my original "pacer" really quickly. My new pacer was running much faster and it started to get much harder to stay with him. The last 3 miles was a real struggle and I was playing all sorts of mind games with myself to try and stay with him for just a little longer and a little longer. The rubber band was about to snap but I kept managing to come back to him. I stayed with him and then sprinted pass him to the finish line. The finish was crazy as it was on a muddy field. Very slippery and impossible to really give a strong sprint. 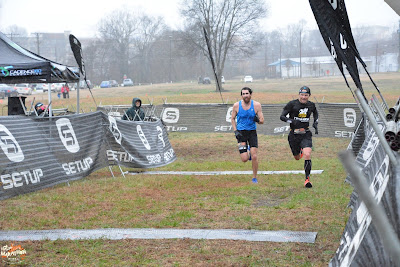 Overall I'm super stoked about this run. Big time PR but I'm ready and happy to do triathlon racing now. It is amazing how much a 75 min running race can hurt! 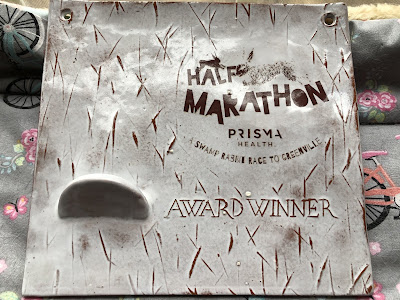 For the video recap...


Quickly after Karel finished, he changed into warm clothes (not to Karel, don't forget an extra pair of running shoes after you finish a running race!) that I brought for him in my car and then we drove a mile down the road to the Kroc center for a swim. We paid a one-day entry for each of us in order to use the pool (which was much more convenient than driving back near our house to swim at Furman). Karel needed to work out the stiffness (as advised by his coach) and we had about 2 hours to kill before the awards. I had a swim workout as well, which was much longer (4850) so after Karel was finished with his float, he walked back to the awards around 11am. 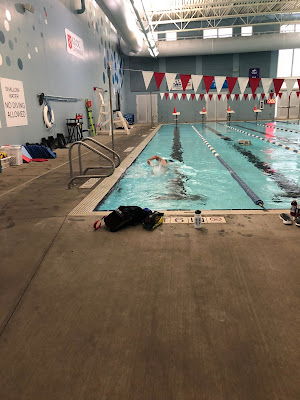 After I finished up my swim, I picked him up and we headed home for snuggles with Campy, food and Super League Triathlon! 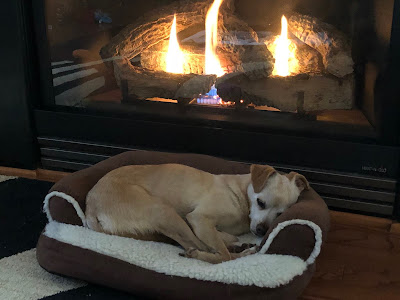 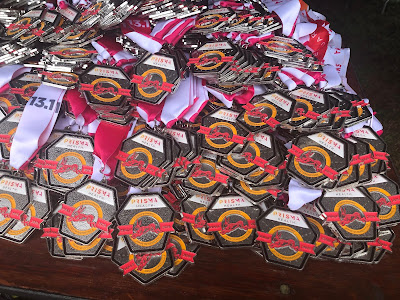