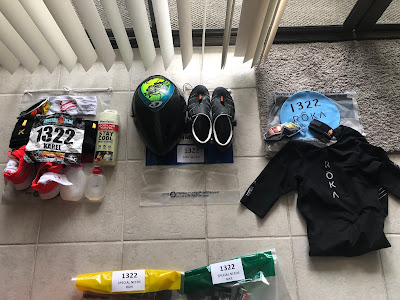 Karel and I live together, train together and work together. But when it comes to racing, we both have a different strategy for feeling "race ready" in the 24 hours before a big event. Whereas I like to talk, watch funny videos/shows on the computer, laugh and socialize, Karel likes to hibernate with techno music, visualizing his race. Respecting Karel's pre-race rituals, I planned a long ride on Friday so that Karel could have time to himself, doing whatever he needed to do to relax without any distractions. 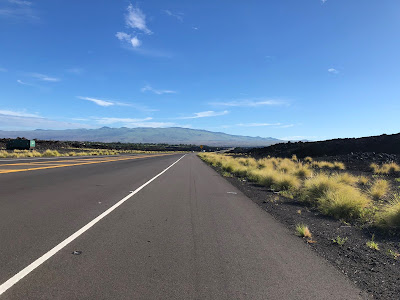 As for my ride, I biked the course! Well, all but 6 miles in town. 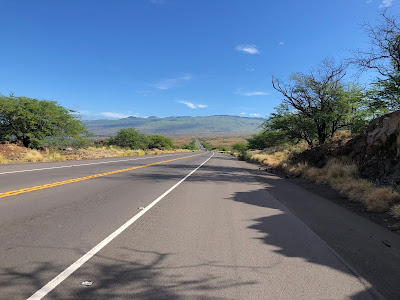 Whereas I've had an unfriendly relationship with this bike course for each of the four times that I have raced in the Ironman World Championship (2007, 2011, 2013, 2015), I wanted to cover the course (to Hawi and back) all by myself. 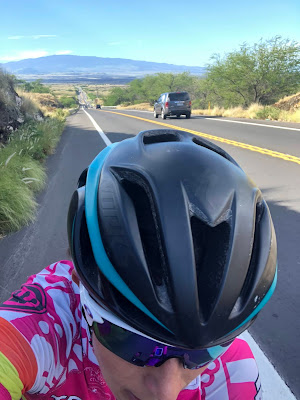 And wow, the roads were rather empty from athletes! Although I did see a handful of athletes scattered over the Queen K and a few in Hawi, most (if not all) were not IM Kona racers. 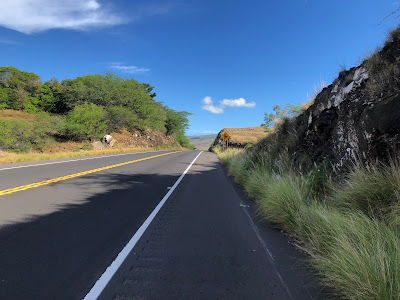 Since riding 100+ miles is a rarity for me and Karel (a combo of where we live and we do more higher intensity training versus long aerobic miles), I also looked forward to sharing 5+ hours with my body and mind. If I've learned anything about the IM Kona bike course it's that the weather is very unpredictable and you have to be physically fit but very mentally strong. 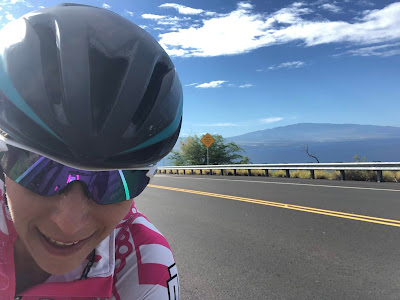 To keep the ride structured instead of just going for a 100+ mile ride, I used the first 8 miles to the airport as a warm-up and then started my main set for the rest of the ride. I went 20 minutes "on" at Ironman effort followed by a 5 minute EZ spin. I continued this for the remainder of my ride (4+ hours), all the way back to town. 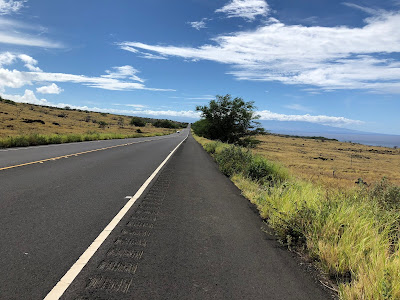 The winds were not howling but it was hotter than hot. I felt like I was riding in a sauna - and this was even with a 7am start to my ride. 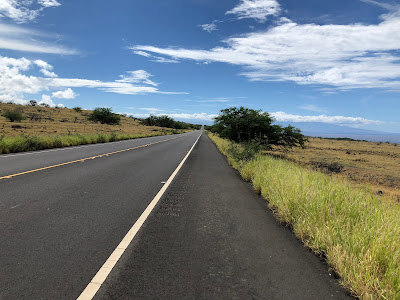 I went through 8 bottles during my ride (5 with calories, 2 with "electrolytes" and 1 with plain water to use for cooling my head. I had a stop in Hawi at the gas station to refill my bottles. 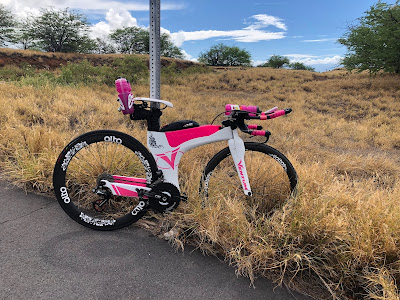 While a year is a long time away, I am getting more and more excited to return back to the Big Island in 2019 for the Ironman World Championship - as a participant. Whereas I turned down my slot last year at IM CHOO, I'm really glad that I took my slot at IMWI last month as I feel much more confident with my open water swimming abilities, my riding skills and my running form. This was a great season for me (training and racing) and I hope to build off this season....after I take a well deserved short off-season break near the end of the month. Next up I have the Hincapie Gran Fondo next Saturday. 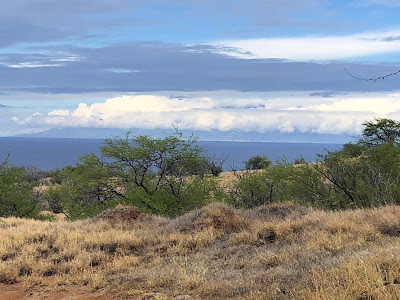 Maui off in the distance.


While I didn't have any lows during the ride (this may have been because I didn't have to run a marathon off the bike), there were a few times when I found myself getting lazy with my pedal stroke. Having the set of 20 minutes ON and 5 minutes OFF helped as I could stay focus and then look forward to a little reset. 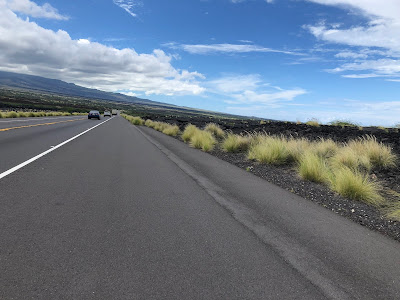 Aside from the cars/trucks on the road, the shoulder was pretty empty compared to the last few days. As someone who enjoys courses with lots of spectators (and loos), I also feel this ride was very valuable for me to be alone for so long with my own thoughts. 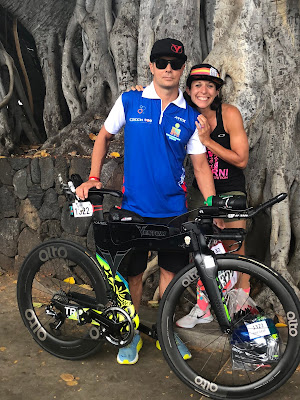 After I returned home, I wanted to see how my legs felt so I went for a quick 16 min run (1 mile out, 30 sec walk, 1 mile back) along Kuakini. I kept the pace comfortable and as usual, I wore my hydration belt. I was glad I had it for it was toasty! After cleaning up and eating, it wasn't too long later that Karel, his mom and I went down to bike check-in. Karel's slot for checking in his bike was 2:30-6pm so he waited until around 4pm to check in his bike. It was a very cloudy afternoon and as I write this now (7pm) it is pouring outside. Tomorrow should be an interesting day with the weather! 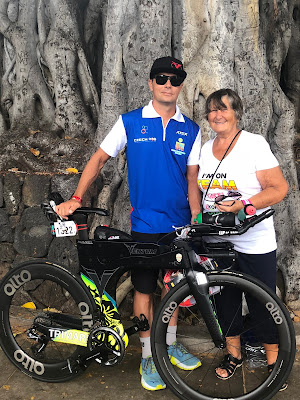 As a spectator and fan of the sport, I really love this part of the Ironman World Championship. There are crowds of people, you can feel the nervous energy of the athletes and you can sense the excitement of dropping off the bike and gear bags with only one sleep to go until race day. 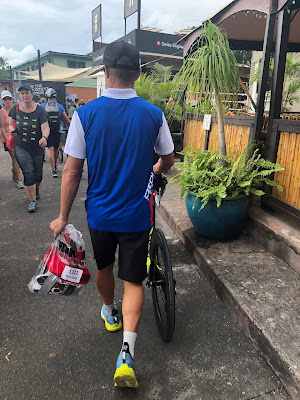 The finish line arch and stage are coming together. It won't be too long until we get to witness the relief and joy by the athletes as they cross the most incredible finish line in the sport. 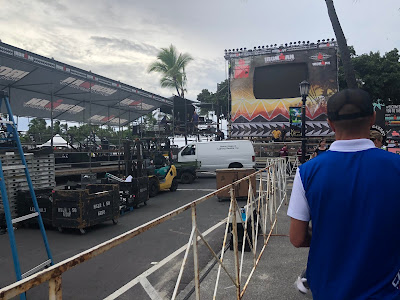 As for the bike/gear bag check in procedure, first athletes will go under an arch (athletes only) and it's a big show for spectators and athletes. There's music, announcers and tons of volunteers. There are literally people just watching for hours as athletes check in their bikes. 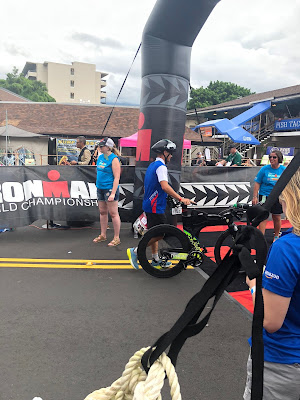 Once you enter the athlete-only area, there are a few booths where athletes with their respective bike gear/equipment will get some swag from the companies. For example, Karel got a Shimano hat because he has Shimano on his bike. It's a cool way for companies to say thank you to their customers. 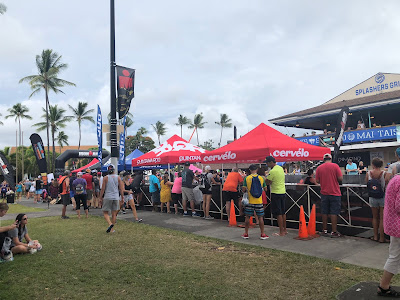 And then there are the counters. There are a good two dozen plus people counting all the bike specs to determine how many athletes have certain brands on their bike. These counters look at everything from bike components, wheel brands, saddle brands, power meters and so much more. The final tally typically circulates the internet a few days after IM Kona on various triathlon websites. 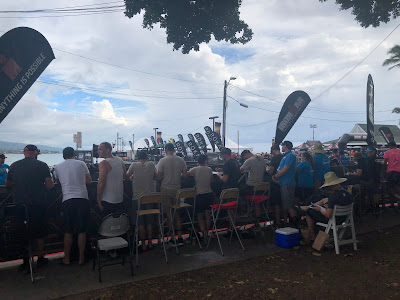 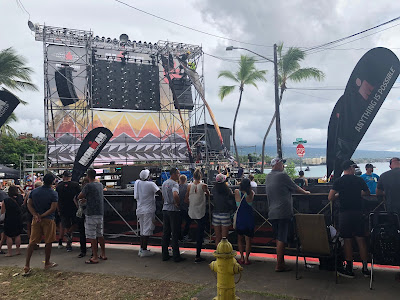 Next up, athletes get their picture taken. Well, actually the bike gets a photo. I believe this is for security reasons but there could be other reasons as well. 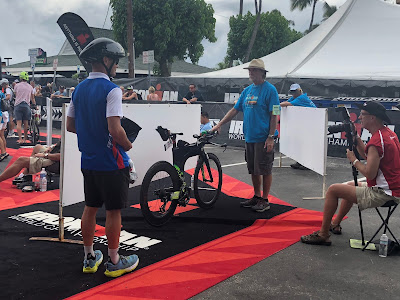 Next is another wait in line before finally entering the transition area. 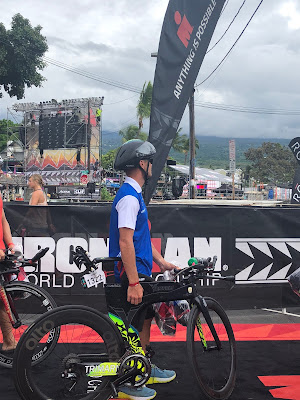 With so many volunteers, from all of the world, it's really neat to see how many people come here just to help out with the event. 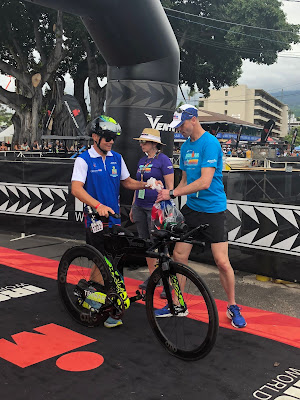 The volunteer takes the gear bag and then the athlete walks to the gear bags to drop off the bags (Blue = Bike, Red = Run) and then place the bike in the floor rack. The helmet must go on the bike and cycling shoes can go inside the Bike bag or on the bike. Nothing can be on the floor next to the bike. The gear bags are also clear for security reasons. 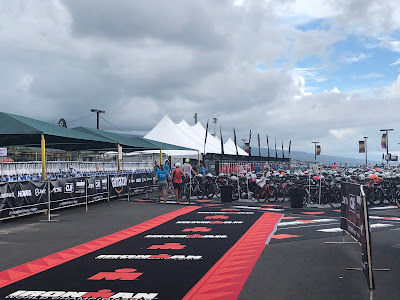 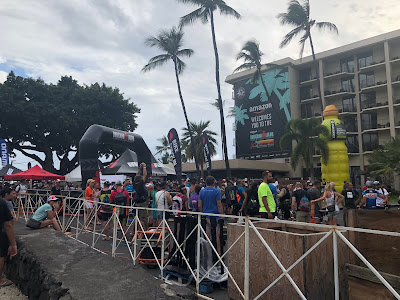 After Karel was finished checking in his stuff, he did a quick video with Czech TV before heading back to the condo. The rest of the evening was "feet up, eat up." 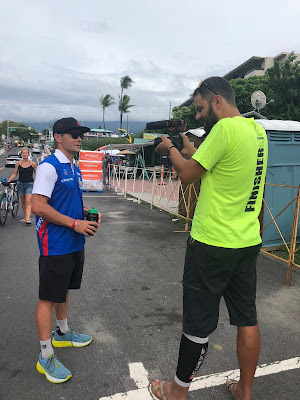 One more sleep and this is where it's all going to start (and finish) tomorrow morning! 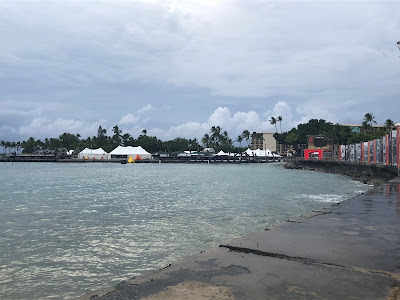 To follow the race, check out Ironman.com, Ironman Now on Facebook and the Ironman Tracker App.
Karel is bib number 1322 (40-44 AG).
I'll also be sharing pictures/updates on my Trimarni Facebook page tomorrow as often as I can.
Thanks for the support!