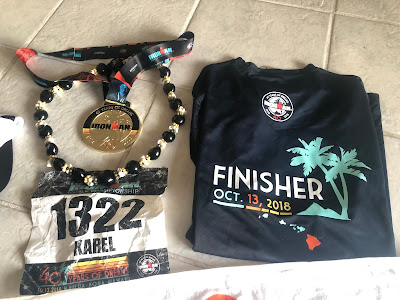 In sport, every athlete is seeking that perfect race. The race where everything goes smoothly, the weather is perfect or your strengths outweigh your weaknesses compared to your competition.

The "perfect race" scenario played out for many athletes at the 2018 Ironman World Championship. Records were broken, PR's were set and dreams came true for many athletes. Crossing a 140.6 mile finish line should never be taken for granted and even for those who did not reach personal goals, the achievement of crossing the Ironman World Championship line is now embedded into the memory bank of every athlete.

Karel did not have his perfect race. For the first time ever, Karel had a mechanical issue on the bike. His electronic shifting was not working as soon as he left T1....less than 75 minutes into the race. Six years of riding with electronic shifting and never has he had an issue. Talk about bad luck. Because of this, Karel could not change his gears. He was stuck in an easy gear with 112 miles of riding ahead of him. Because of the calm winds, this was a day where having "big" gears would allow you to ride fast. Karel is not angry or making excuses. He actually blames himself as he clipped the wire to his Di2 as he was packing his bike before our Kona trip two weeks ago, and secured the wire with electrical tape. He's done this in the past and it worked out and even this time around, he had no issues with his bike over the past two weeks. However, with the massive downpour on Friday night, the taped wires were impacted by the rain (otherwise, the wires/battery is just fine in the rain) and it drained the battery overnight. Karel did not realize this until he tried to change his gear at mile 0.1 of his upcoming 112 mile bike ride.

Whereas it would be easy to dwell on the could have, would have and should haves, Karel is very proud of what he overcame to reach the finish line.

You see, when an athlete has a perfect race, he/she is instantly rewarded with the feeling of satisfaction and gratitude. There's nothing wrong with that and as a coach (and athlete), the "perfect" race is worth chasing. However, things don't always have to go as planned to achieve the perfect race. More so, if you are hoping to have a perfect race every time you race, you'll likely be disappointed far more than you'll be satisfied. Does this mean that you should give up on chasing your goals because the odds are against you in having that perfect race?

Sport can be cruel and unpredictable but it's important that when you lose, you don't lose the lesson. In other words, giving up because of a mistake, failure or low moment teaches you nothing. Sure, when things don't go as planned, it's ok to be emotional, upset or disappointed, but when you give up, you immediately lose the opportunity to overcome whatever set you back and learn from the situation. And more importantly, learn more about yourself.

If an athlete always has a "perfect" race, he/she never gets the opportunity to learn the important lessons that sport teaches us. If your natural response to unfavorable "perfect" race scenarios (ex. bad weather, tough/fast competition, mechanical issue, nutrition issue, etc.) is to give up, you ingrain the habit of giving up when the going gets tough.

While no athlete should sacrifice health in an effort to get to the finish line, many athletes give up when things don't go as planned - even though the body still has the ability to move forward. These pressure cooker situations often emotionally break athletes and throw them off their game and thus, the immediate reaction is to give up due to excuses, negative thinking and the thought that continuing "isn't worth it." But when you give up, you also give up on any chance that you have to have a good outcome. For any outcome is better than not finishing what you started.

No athlete trains or hopes for race day issues, whether it's physical, mental or mechanical/gear related. But these things are bound to happen. Especially if you are racing for 140.6 miles.  When you give up, you give up on your effort, the progress you made and on the possibility for a comeback.

In contrast, if you try to see the best in the situation or try to fix the situation, you at least give yourself a chance that something good may happen. And that's something you can be proud of. Every athlete is bound to have race day issues. It's not about IF those issues will happen but how you respond to them. While you may not reach your race day goals with a setback, you can cross that finish line with satisfaction, excitement, confidence and gratitude that you are a tenacious competitor who always finds a way to persevere, no matter what the day gives you.

Although Karel did not have his perfect race, he was given the race day scenario that provided him with the perfect platform to show his mental resilience and integrity to the sport.

Karel started the day off with a phenomenal swim showcasing his continued improvements with his swim fitness. Despite a bike performance that costed him a lot of mechanical fatigue due to having to spin at a very high cadence (115-120 rpm at times versus his normal mid-80 rpm cadence) or riding with an extremely heavy gear when there was a climb (often standing for the entire climb), Karel was able to pass over 100 athletes in his age group on the run (185th place to 82nd place out of 266). While it wasn't his fastest marathon run off the bike, he suffered a lot during the run and never gave up on himself to put together the best performance possible on the day, with the scenario that he was given.