I can't believe that we are rolling into another race week. It's been great to have something to look forward to and to keep the enthusiasm for training alive, week after week.

This season has been a bit unconventional for us as it relates to training. Although the pandemic was such a stressful and difficult time in our lives, it also provided us with an opportunity to step away from structured swimbikerun training. We took advantage of the opportunity and have kept our souls happy with swimming, biking and running, but just in different ways than in the past. With no goals to chase at races, we are so happy to still feel a spark for triathlon training and racing, especially after such a challenging past year.

After our loooong drive home on Sunday after our Xterra race weekend (off-road tri for Karel and trail run for me), I needed a lot of sleep. I had no plans to workout on Monday as I had a lot of work and consults to check off my to-do list. With no intention on working out, I heard online that the Furman campus had opened to the public (after 15 months of being closed) and I couldn't wait any longer to be reunited with that beautiful campus (it's about 1.5 miles from where we live). I got on my road bike around 6:15pm and had an easy 43-minute cruise which included a lot of happy miles through the campus. 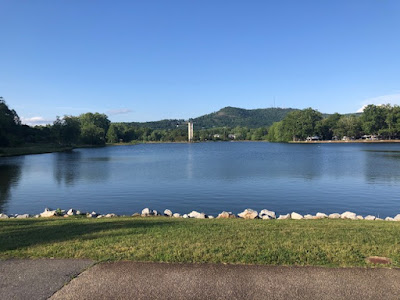 On Tues morning I met my swimming partner/good friend Kristen at the aquatic center and at 7:30 we had a great swim workout. Three rounds of 7 x 100 steady effort on 1:45 (meters/long course) and I was coming in around 1:27-1:29. After each round of seven, we did a 300 smooth w/ choice toys). I felt really good in the water. The trail race + travel really made my IT band angry so I was being extra careful with my posture while working and light mobility and foam rolling on my back, quads and hamstrings. But swimming felt really good - the movement helped. 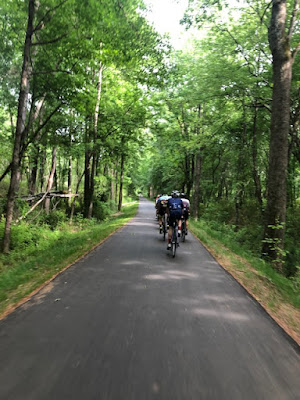 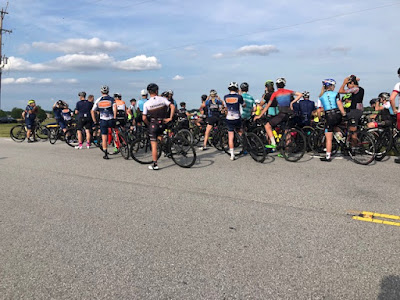 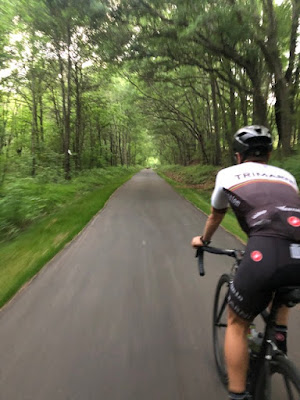 In the afternoon I had planned a bike/run workout but after texting with my friend Alexi, I convinced Karel to join me (and her) for a group ride at Donaldson. But instead of driving to the start of the ride, we biked there with a semi large group on the Swamp Rabbit Trail to downtown and then on several new roads that we have never been on. It was a very adventurous ride as we had to jump over a guard rail with our bikes, ride on gravel and climb on a few big rocks to get to the start of the ride but it was fun nonetheless. We started at 4:40pm and arrived to the Donaldson center (7-mile perimeter loop) around 80-minutes later (17 miles). There was a very large group for the ride as the first loop was a memorial ride for a local cyclist who had passed away from a senseless tragedy and then was the "race" part of the ride - 5 loops with a police car leading the ride. There must have been over 200 people at the ride and a good 80+ people starting the "race" ride. Because I was on my tri bike (ha - I did all that adventurous stuff on my tri bike while everyone else in the group was on their road bike), I did my planned workout in the other direction of the ride (other side of the road) which was 15 minutes, 30 minutes, 15 minutes, each with 5 min recovery. All ON efforts were steady strong. Karel did the group ride and they averaged 27 mph! He had a lot of fun in the group on his road bike. We then biked back home on some new roads that we had never ridden on and the entire workout was 3.5 hours and almost 63 miles. Knowing that Wed was going to be a rainy day, it was nice to knock out a longer mid week ride - and it went by so fast and it was so much fun!

On Wednesday morning I opted for the treadmill. My IT band was feeling better and I wasn't feeling a colder run in the rain. After Karel and I did an EC Fit mobility session, Karel ran outside and I did 10 x 3 min steady strong efforts w/ ~90 sec EZ between for a total of ~75 minutes of indoor running. The time passed by quickly as I had several Vlogs to catch up.

On Thursday morning I had another good long course swim. It was a long one of around 4600 meters (~5000 yards) and I did a lot of pulling (paddles and/or buoy) to focus on the upper body. Around 4:30pm, we drove to the Donaldson center for the big "event" of the week - the Spinners 10-mile TT! This free event (all you have to do is be a Spinners Cycling Club member) was something that I really looked forward to last year as all our triathlon races were cancelled so this TT was a fun way to suffer and be in some sport of "event" environment with a bib number, start and finish line. Our athletes Alvi, Yannick and Ruthanne also participated. Karel wasn't on board until the day before the event when he convinced himself that he wanted to do it as well. 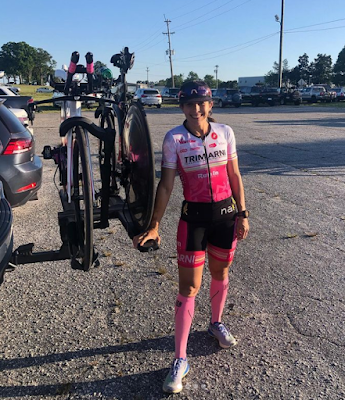 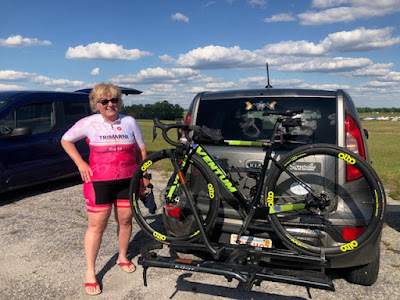 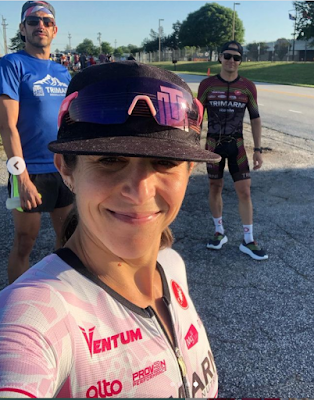 After picking up our bib number, we did a warm-up on the opposite side of the course for around 33 minutes. This warm-up included a few pick ups to get the blood flowing. It was really really windy and I was a little apprehensive to ride with the disc wheel but I tried to get the negative worries out of my head by reminding myself that "racing" always feels different than training.

My start time was 6:10pm so I lined up around 6:07. Karel's start time was 6:14pm. There was someone there offering to hold the bike (official time trial start position with both feet clipped in) but I was a little nervous to try that for the first time so I just clipped in when I started.

As for the 10 mile out and back time trial, I gave it all I could and really focused on being aero, working the downhills and being willing to suffer deep on the uphills. The biggest hills are at the beginning/end so I gave it all I could and was happy with my effort. I was the only registered Pro 1/2/3 female which was a bummer to not have any competition. Maybe next time. It was fun to race with some of the guys. After the ride we did an EZ spin for 20 minutes and then gave a big shock to our legs with a 20 min run off the bike - ouch! It took a good 1/2 mile just to loosen things out from the hard effort. Karel did great and he was happy he didn't have any back pain on the TT bike.

It was a late night as we didn't get home until around 8:30pm and then an early wake-up alarm for our 7am master swim workout on Friday morning. Surprisingly, Karel had a really great swim. I was struggling a bit but was still able to put together a good 3800 yard long course workout (~3400 meters). I had a well-needed massage on Friday at 12:30pm and I was really happy that my ITB was no longer angry but the massage was good as my hips were feeling a bit tight and twisted and I didn't want to take any risks going into the weekend (I actually booked the massage before the trail run as I knew I'd be dealing with some niggles after running off road for 13+ miles). In the evening, we drove to Furman to walk Campy around the Furman lake. It was so nice to be back on the campus with Campy as we love walking him on the beautiful campus. 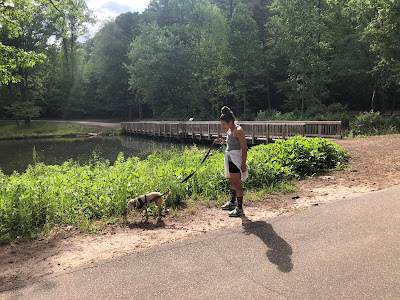 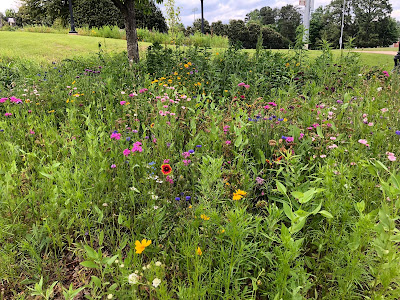 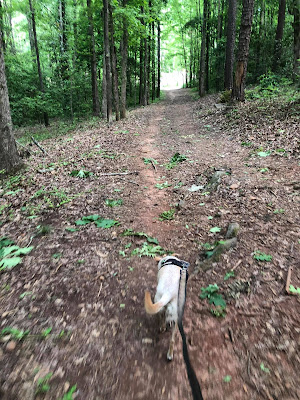 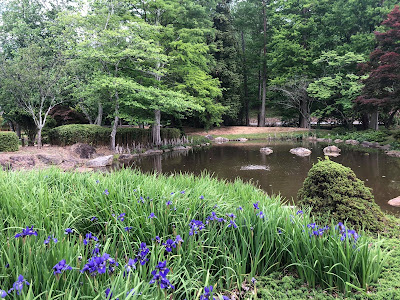 As for the weekend, it didn't feel much like training. I guess that was kinda the theme for the week as I was really looking forward to every workout and the time just went by so quickly with each session. My friend (and pro cyclist) Alexi texted me on Friday evening to see what my Sat riding plans were and it worked out the I was planning a 2.5-3 hour ride on my tri bike w/ some intervals and she had 3-4 endurance ride planned. So we linked up for the ride (Karel joined as well but did his intervals ahead of us) and after ~1 hour of warming up on the country roads, I did my intervals on Pumpkintown Road and Alexi just stayed on my wheel. The workout was:
3 x 15 min (build within to over half IM effort) w/ ~5 min EZ between
20 min steady strong 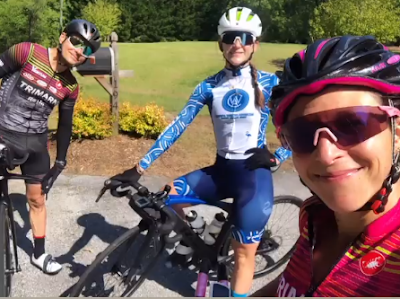 We ended up with almost 3 hours and 52 miles. I felt really strong on the bike and Alexi kept me honest with her staying on my wheel. The miles went by really fast and it was nice to have some company for this last ride before race week (IM 70.3 Chatty). After the ride, Karel and I did a ~40 min run w/ 3 x 5 min stronger efforts w/ 3 min best EZ pace between. Both of us decided to run in Furman and it felt great to be back there running. In the evening we had dinner with my mom at her house and then walked to the park in her neighborhood for live music. 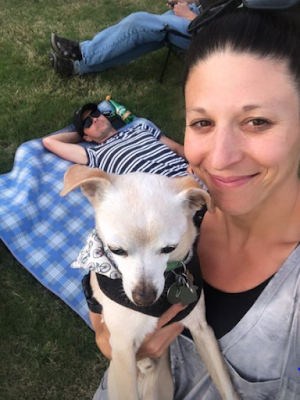 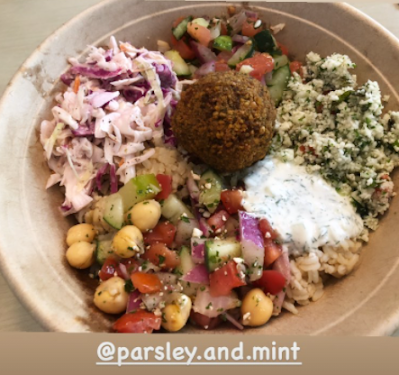 On Sunday morning, Karel had a last minute idea to do a 1-hour gravel ride in Tuxedo, NC (by Lake Summit) followed by a run around the lake. I was excited for the change in scenery and I just love running off road at Lake Summit. It was a beautiful gravel ride and then a strong build run off the bike. Karel ended up with about a mile more than me on the run as he ran the last mile with me. We both felt surprisingly good over the weekend - although we are both in need of a good night of sleep tonight. 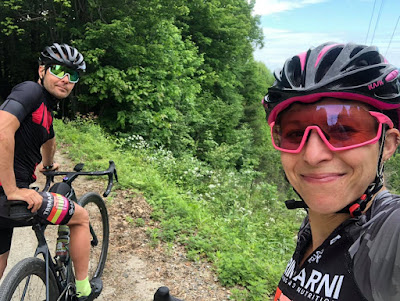 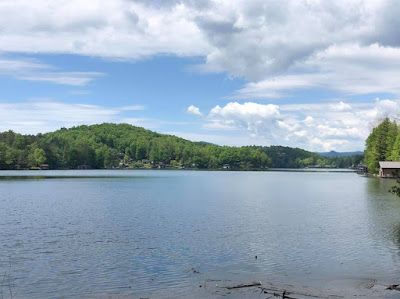 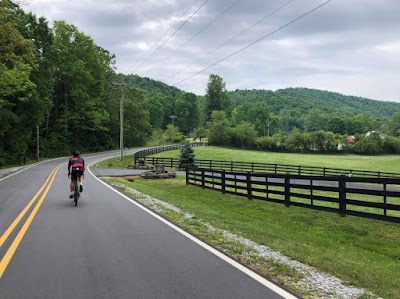 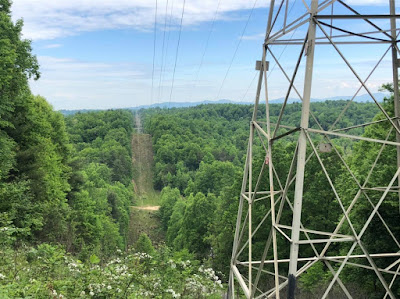 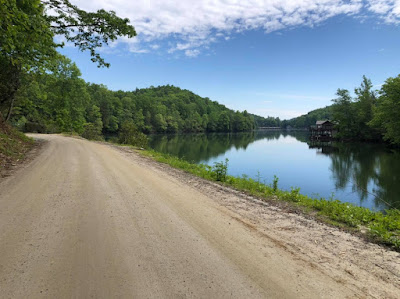 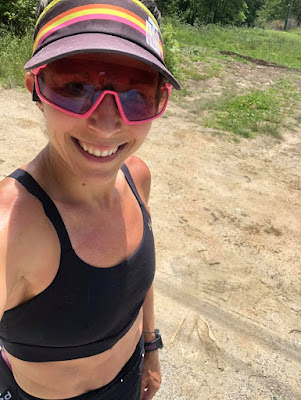 It's been a while since I have done a weekly training recap and I felt like this was a good opportunity to share how we have been having fun with "race" specific training. !6 hours of training and although it was tough at times, it was a lot of fun. It may be unconventional but it's certainly feeding our soul - which we need right now in our athletic career.