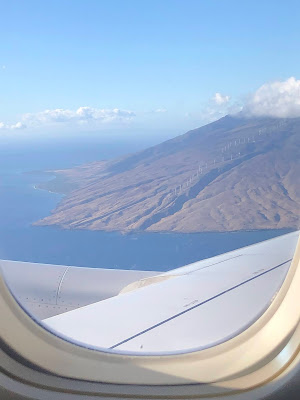 After seven trips to the big island of Kona for the Ironman World Championship (5x racing, 2x spectating Karel), I now have the incredible opportunity to travel to Maui. This experience is actually another unexpected opportunity that came out of the pandemic.

In the winter of 2021, Karel was really getting into gravel biking. With so many new off-road adventures around our area, he also found himself riding his mountain bike a lot more frequently than in years past. After hearing about Xterra Oak Mountain from Eric Lagerstrom on his TTL (That Triathlon Life) YouTube channel, Karel decided to participate in his first off-road triathlon - where he placed 1st AG (45-49) and 5th overall amateur.  He had so much fun and he was itching for more off-road adventures.

Next came the USA Championship in Snowbasin, Utah in late September (a week after we participated in the IM 70.3 World Championship event in St. George) and now, here we are in Maui for Karel to participate in the Xterra World Championship. Although the participant list is smaller than in years past due to COVID (and the event is being held several weeks later than normal), Karel is really 'stoked' to have this first-time opportunity to participate in the 25th anniversary of this legendary race. Although a trip to Maui is serving as an amazing opportunity for us to escape the colder temps in late November/early December, I'll also be participating in the Xterra World Championship, but in the 21K Trail Run. I race on Saturday and Karel races on Sunday. This will be a true race-cation for us both!

Travel Day.....
Because Xterra didn't get the green light for holding the event in Maui, Hawaii until a few weeks ago, I waited to book our flights until we knew 100% that the race would happen. Earlier this summer, I had booked our Airbnb and reserved a rental car knowing that I could cancel both of those without being charged. Our flight options were not the best as the flights were either expensive, the seat options were slim or the route options were not ideal. However, after comparing lots of different options, I was able to book a reasonably priced United flight from Charlotte to Denver and then Denver to Maui. We decided to leave for the airport super early on Monday morning to avoid any type of Thanksgiving traffic. 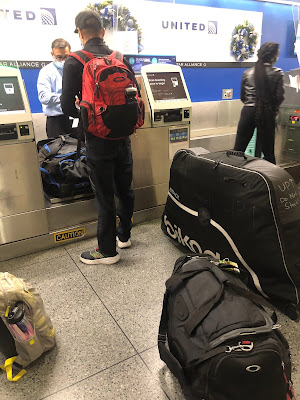 We left for the airport at 4:15am and arrived to the Charlotte airport around 5:45am. I reserved our parking online which is something that I have never done before. As I was looking up a map for the airport to get familiar with the parking layout, I came across a link for pre-paid parking. For an incredible deal, I was able to reserve 9 days of parking at the hourly parking garage right across from the terminal - no long-term parking shuttle needed! Even though it would cost ~$40 more than long-term parking, that extra cost was worth it as it meant we didn't have to worry about waiting for the shuttle and having to lug our suitcases and Karel's bike case around. Since we were traveling the day after the Thanksgiving holiday weekend, I wanted to minimize any extra possible stressors (or delays) that we could encounter.

Since we arrived a little over 2 hours before our scheduled flight to Denver, there was no line for checking in our luggage with United. Karel packed his bike case to be 50 lbs so there was no charge for the bike and no charge for our luggage (2 bags each) since we were flying premium cabin (2 free bags each). I've become rather creative with booking our travel so I always weigh all the costs, pros and cons and possible issues to try to ensure a smooth traveling experience for our race-cations. So far, all went smoothly.

The line for security was somewhat long but we weren't rushed so there were no issues there. We finally boarded our plane around 8am and we were off to Denver. For our ~4 hour flight to Denver, I watched a few shows on my iPad with the free United entertainment app and took a few short naps. Karel purchased Wifi so he could work on Training Peaks.

When we arrived in Denver, we had a little less than 90 minutes before our next flight. At this point we were a bit hungry so we purchased a delicious early lunch at Garbanzo Fresh Mediterranean. OMG it was so good, Karel and I could not stop yumming. 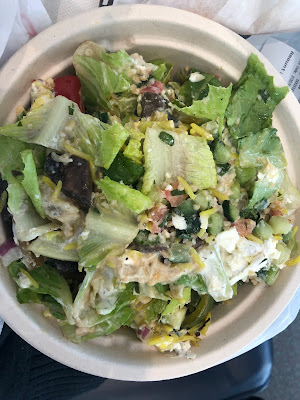 We finally boarded our long flight to Maui (~7 hr flight) and waited another 30+ minutes before leaving the runway. We were lucky to get front row seats in the Premium section (just behind First Class) which meant lots of leg room and space to move around. Karel gets extra cranky during long flights (especially when they are really peopley so he was much more relaxed with our two seats at the front of our section. We even had leg rests and two hot meals! 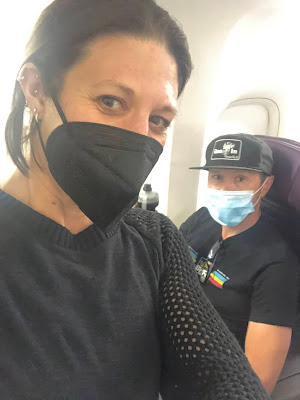 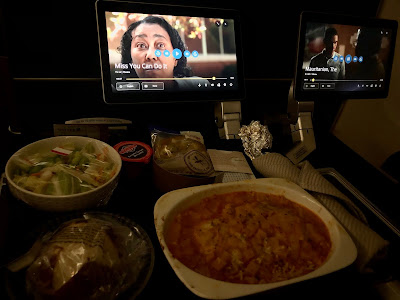 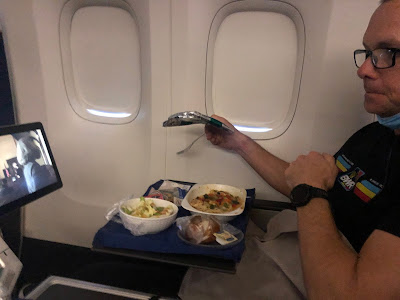 I watched a few movies and took a few short naps. Although the flight was long, it was nice knowing that it was our final flight before arriving to Maui. The plane was packed and it had a very different vibe compared to our Kona travel for the Ironman World Championship. There's something about sharing a plane with so many triathletes as you can feel all the excited, nervous energy. But nonetheless, we were excited for our first trip to Maui.

After we landed, we entered the airport (which was covered, not like the outdoor airport in Kona) and couldn't wait to smell the salty flowery air. But first was a 40+ minute wait to show proof of our Hawaii Safe Travel QR code to show proof that we were vaccinated so that we didn't have to do a 10-day quarantine. The line was very long and slow so this was the biggest delay of our trip. But we finally made it through the line and on our way to get our luggage. Next came the short shuttle to pick up our rental car from Budget and finally, a little after 5pm we were finally on the road in Maui to make the ~1 hour drive to our Airbnb. 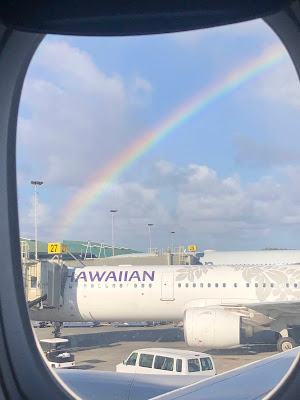 The sights and smells were familiar yet different. It's hard to not compare Maui to Kona and to feel like so much is so different. But the more I think about it, the allure of Kona is more about the history of the Ironman World Championship and the beauty, mystery and variety of the elements on the Ironman World Championship course. Maui is not Kona but there is still a lot to be in awe about on this island. 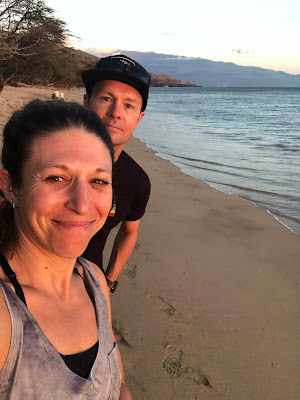 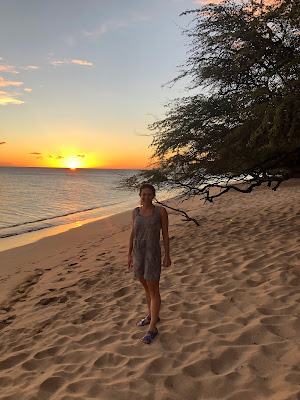 As we were driving to our Airbnb, we made a quick stop at a beach parking lot to snap a few pics as the sun was setting. We then made a quick stop at the Safeway grocery store (groceries are very expensive here as usual and there is only one Walmart on the island which is by the airport) before arriving at our Airbnb. Because it was very dark when we arrived (~6:30pm) we could only hear the waves crashing in the distance. We were really tired but mustered up a bit of energy for a light meal (Karel made himself a deli meat sandwich and I had yogurt, fruit and granola) before we hitting the bed around 8:30pm.

It was a long day of travel but it felt so good to finally lay down and get some good sleep. 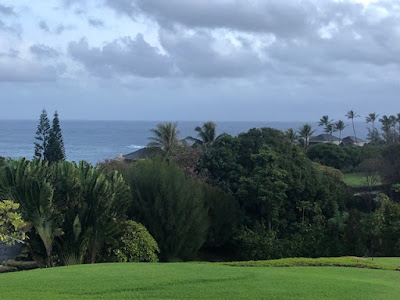 As usual, we were up around 3am tossing and turning and eventually Karel got up around 5am and I got up around 5:45am. We started our morning with a cup of coffee (of course, Karel brings his travel espresso machine on every trip whereas I enjoy Nescafe Gold Instant coffee) before spending the next two hours catching up on emails and a bit of work.

Even though we woke up to rain, we instantly felt that good island energy. 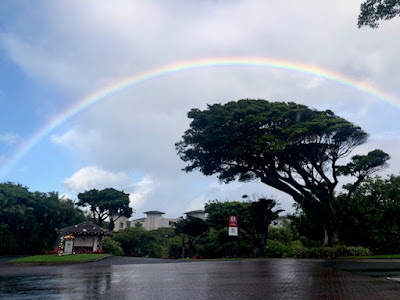