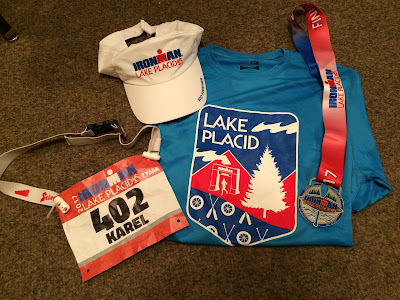 Karel is a "make no excuses, make things happen" kind of guy. He has carried this motto through his life and this mindset has helped him overcome so much in sport.
Karel is not one to make excuses, complain or blame others when things don't go his way. Regardless of the situation or circumstances, he doesn't spend much energy on things out of his control, he always keeps an open mind and he will be the first to tell you that he will take responsibility for his choices and owns-up to his decisions. He also admits that he is not perfect and he does make mistakes.

As it relates to sport, he competes for himself because he loves competition. He's not afraid to fail and he doesn't worry about what other people think of him.

Excuses are a way to avoid failure. Karel doesn't dwell on the past or think "what if" but instead, he looks for the opportunity, the possibility or the chance that things go well, even when he's not destined to succeed.

Karel is a no drama, no excuses, make things happen kind of guy and his Ironman Lake Placid performance demonstrated just that.

On July 10th, just 10 days out from race day, Karel came home from an easy spin and within an hour, he felt sick. The feeling turned into chills and sweating and suddenly he was in bed, with a fever. Although he did not have any above the neck issues (sore throat, coughing, runny nose), his body completely shut down for 48+ hours. Karel spent all of Tues and Wednesday in bed, struggling to eat, move or expend any amount of energy. Ironman Lake Placid was not longer a focus but instead, Karel was trying to beat the flu. He didn't complain but instead, he admitted that his immune system was down after his last load of training and he must have caught something. After 6 years of not getting sick, Karel was suffering.

But, he didn't expend energy on what was out of his control and instead, he just focused on letting his body take care of the healing process. Since we are not "quick-fix" type of athletes, we let his body naturally take care of things without rushing to the doctor (or store) for medication. Karel made his mom's garlic and potato soup that is known to help with healing, I kept Karel well hydrated and nourished with fruit, water, orange juice, applesauce and anything else that he could tolerate that would provide him with nutrients and he just slept until he felt 80%. On Thursday, he was feeling about 80% (he could think and move a bit more normal) but he knew his body was still struggling. For the next 2 days, Karel managed to exercise for about 30 minutes each day by spinning easy on his bike. On Saturday and Sunday, Karel was able to do a modified workout each day but at a very low intensity to not stress his cardiac system. With his muscles fatigued from the final training load, he never recovered from his peak training and the flu completely destroyed his immune system. 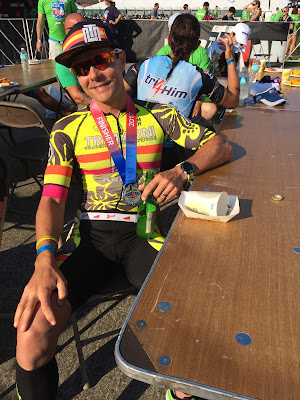 Since Karel competed in Lake Placid for his first Ironman in 2013, he has always wanted to come back and race with his improved swim/bike/run fitness. As you know, in 2015, he tore his plantar two months before the race so he was not able to finish the race after the bike. With this being Karel's comeback race to prove to himself that he could race strong on this very tough course, under these new circumstances of going into his 8th IM with compromised health, he knew that he would need to be very careful with his pre-race training to not sabotage his health but at the same time, the priority to protect his health also left him with a lot of uncertainties of race day.

Before the race, I told Karel that he could only do his best and that's all that we could ask for. I also told him that even on a not-so-good day, it could still be good enough to be on the podium. You never know what will happen on race day and that's what we love about the Ironman distance. You simply never know what will happen until you cross that finish line and look back on all that you were able to accomplish and overcome.

Karel suffered on race day. Even with a huge PR in the swim, he was not able to produce any power in his legs and that empty-leg feeling left him with a bike time that he was far from proud of for the day. He didn't let his ego get the best of him as his competition was riding by him on the bike course as if he was pedaling backwards. Nonetheless, he still focused on being in the moment, taking care of what he could control (his attitude, his terrain management, his nutrition) and just taking the race mile by mile. He didn't think negative thoughts or throw in the towel but he just kept moving forward. When he got to the run (typically his favorite part of an Ironman), he didn't race with his usual running confidence but instead, he raced not knowing how his body would be able to run a marathon on empty legs.

I don't know how he did it but Karel was able to run with empty legs, a numb body, screaming quads and a body that wanted to lay down in the grass and not move for hours. He moved one leg in front of the other, walked at times to try to collect himself and with each mile clicking away on this extremely tough run course, he was never sure when his next step would be his last step.

The Ironman brings highs and lows and for Karel, his day started out with a high in the swim but for the next 8+ hours, he was able to conquer the demons in his head (telling him to quit) and managed to get to the finish line. While it wasn't the race that Karel trained and hoped for, it was more than he thought he could accomplish, under the circumstances that he was given going into the race. 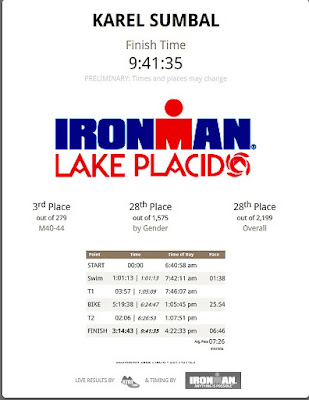 Karel's no excuses, make things happen attitude clearly works for him. I don't know many people (including myself) who can face defeat, setbacks and failures, like Karel, and can still think that anything is possible.

Although Karel's race performance landed him in the medical tent (for the first time in an Ironman) for a good 60+ minutes due to complete exhaustion and being a bit delirious at the finish (no dehydration or IV's needed), shortly followed by Karel telling me that this was the hardest race that he has ever fought for and he doesn't think he can do another Ironman ever again (we all know how long that thought stays for), he was still able to put together the best race that he could, on the day, which landed him on the podium, with a slot to Kona. 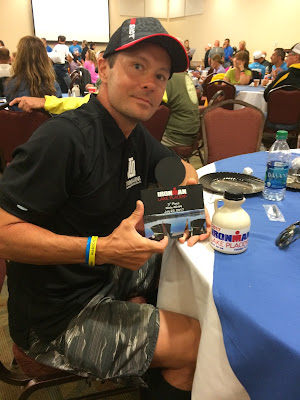 Karel declined his slot to Kona for this year as he will be racing Ironman Chattanooga in late September and hopes to qualify for the 2018 Ironman World Championship.

There was no pita-party for Karel after the race. No excuses. No what-if's. No complaints.

Although this wasn't the race that Karel trained for, he reframed every obstacle in his way with a positive mind and conquered much more than he thought was possible by his body. Clearly, his mind was stronger than his body on race day and this helped him prevail on a very challenging course, on a very physically tough day.

Karel's Ironman race day was truly about digging deep. Digging deeper than he has ever dug before.
In a few days, Karel will forget how bad this race hurt his body and once he recovers from this Ironman (which will take a bit longer than in the past), I have no doubt that he will be mentally and physically ready to do it all over again in 8 weeks.

Although it's normal to be disappointed in a race that didn't go as planned, remember that every race is a learning experience. With a "no excuses, make things happen" mindset, you may not only accomplish more than you thought was possible but you will likely learn far more from the bad races, than from the great ones, when everything seemed to easily go well. And it is from those very tough, how in the heck did I finish races that you will gain the necessary tools and confidence to one day, conquer your athletic dreams and make great use of all that you have learned in your many years of training and racing.